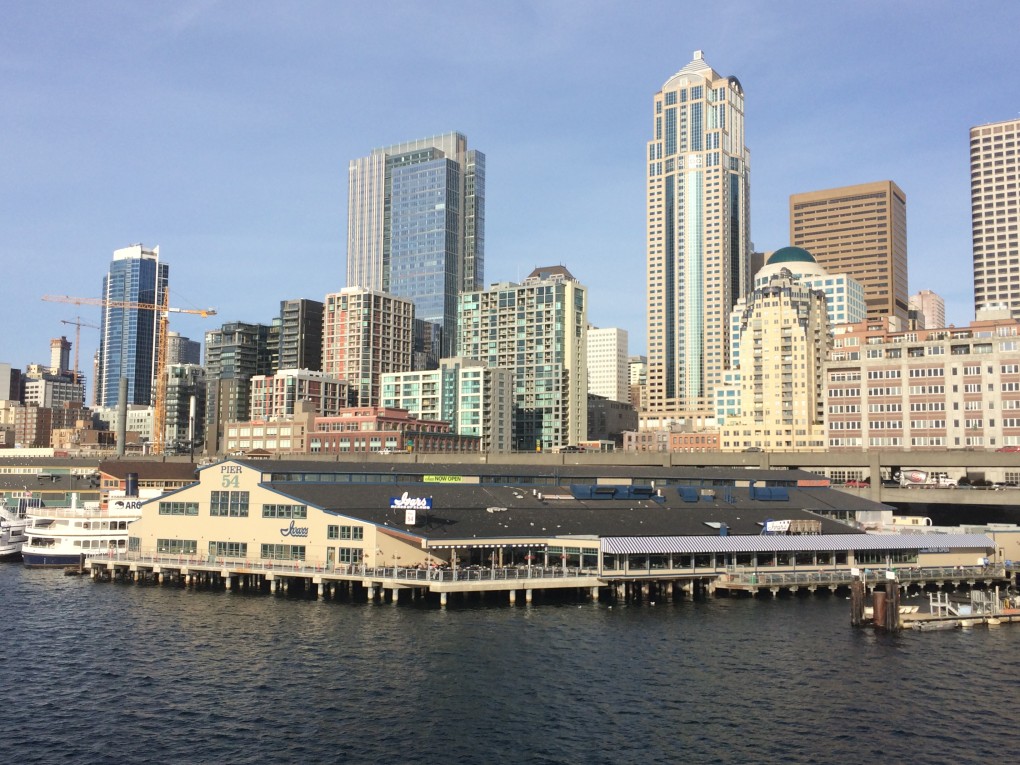 Maintenance at the Pier was deferred for 10 years following the Nisqually earthquake due to a discussion about removing the viaduct and potential lengthy closures along the waterfront. In late May 2014, Ivar’s began seeking a contractor for the Pier 54 Piling and Apron Replacement. The existing pier was originally constructed for industrial use.  In the 1980s, steel concrete-filled piles were added under the main 2-story pier on the east half of the building.

The work involved extensive under dock repairs and concrete work. Reid Middleton was selected as the Engineer of Record to undertake the structural design efforts. The original plan called for 24-in steel piles x 0.5-in walls, precast pile caps, pre-cast slabs and topping slab to minimize cast-in-place concrete made difficult due to the logistics of pouring/pumping concrete while adjacent construction activities were underway at the neighboring Elliott Bay Seawall Replacement project for the City of Seattle. The sheer transfer was accomplished by using drag struts to tie the building into the new pilings. The design assumed site-specific ground responses per ASCE-41, not accounting for any existing wood piles, just counting the north and west apron. The design approach was a voluntary measure to upgrade the structure for seismic improvements.

The project had several challenges, including extensive coordination between the Contractor and Designer to confirm project plans with actual conditions. Impact pile driving was not permitted during pile installation. 3 marine mammal monitors were present during installation. In the end, approximately 450 timber piling was removed, 85% of these from the old timber apron;  46 new 24-in dia. piling, 7 new 18-in diameter piling, 18 new 12-in driven and 68 new 12-in stubbed piling were added; 2 existing track chords comprised of 2 each 9-in x 18-in timbers were stitch bolted together beneath the depressed track area; over 900 tons of timber and concrete debris was disposed of; approximately 400 CY of structural concrete was cast; approximately 52 tons of reinforcing steel was installed; and approximately 36,000 board feet of lumber, mostly 12 x 12 and 12 x 16, were replaced, all performed from under dock staging. The job was serviced in excess of 26 barge loads to handle construction materials and debris. At the peak of construction, there were 28 employees working 10 hours a day, 6 days a week.

The interior remodels and pier restoration was the biggest in its 77-year storied history.